My initial draft report on the 50 Years of the Internet on Wednesday 30/10/2019, hosted at Plexal, London, which I will develop over the following day

Alan Kay talked about how the Internet grew out of WW2 innovations and ways of working, including radar systems. ‘The bosses of Tizard et all allowed them to do what they wanted to do and they invented the cavity magnetron’. Many of the inventors of the Internet were reading what Vannevar Bush, the US President’s wartime scientific advisor, wrote in ‘As We May Think’ in 1945. In 1962 JCR Licklider talked about computers being destined to become an intergalactic network, as he knew his aspirations would be scaled back.

Alan Kay at 50 Years of the Internet event

Bob Taylor, head of the Information Processing Techniques Office (IPTO) at ARPA would say of the ARPA directors they were ‘scientific statesmen’ who would stand up to people in Congress. His boss, ARPA director Charles M. Herzfeld, said to Taylor ‘What do you want to do?’ and he said build [ARPANET], which was a 15-minute conversation, and he said he would need $1m. It got started and it was a year before there was any [paperwork]. Imagine how many reasonable people would be put in the path of progress today?

Normal has been re-defined downward; things today are a shadow of better ideas from the past

Alan Kay at 50 Years of the Internet event

Don’t treat the past as it if it like today but cruder. In fact, the present is a cruder version of an unrefined past. Normal has been re-defined downward; things today are a shadow of better ideas from the past. There are almost no good ideas in the mobile phones that you have.

We need to think about communicating with ‘aliens’. Shared context is important. Humans in groups communicating with themselves is one example of ‘alien’ problems; then adding in computers is another, including interfaces with humans, and between software and hardware.

We use media to communicate with ourselves and others but haven’t learned from the way in which in Doug Engelbart’s collaborative meetings, in which the documents everyone had their own cursor in a document.

The important thing about tools is that they train us. If things don’t do what we want ‘we hammer them’. The hammer of today is AI, but we have a Pleistocene brain. What does it mean when we replace things with computers?

Approaches to research: Visions not goals; Fund problem finding; Fund people not processes; Only fund the best people; Part of the research process is funding the creation of new researchers. 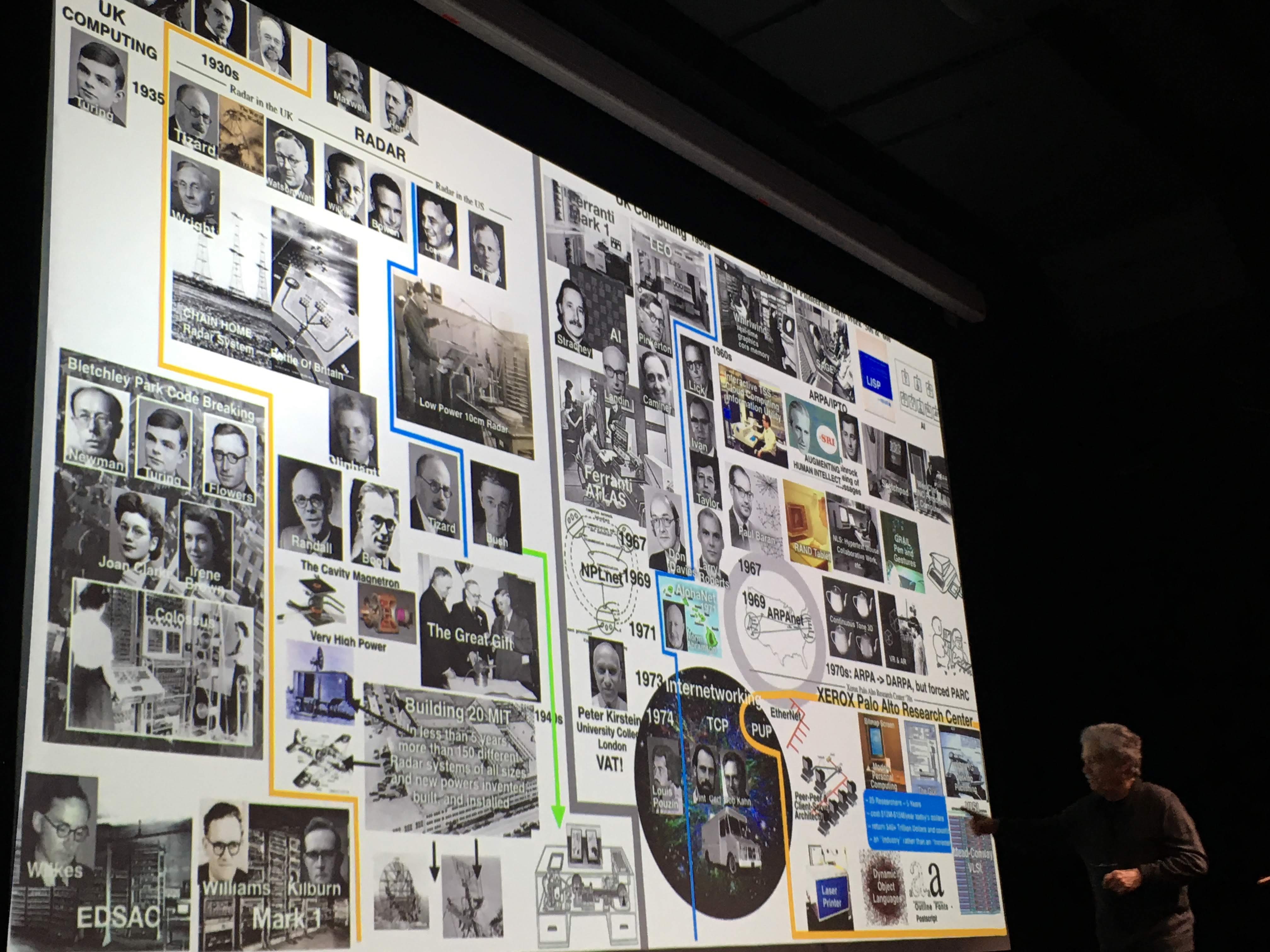 Peter Kirstein, UCL professor and ‘the father of the UK internet’

My raw notes on and photographs from the event: